We will gladly receive your call, or you can also contact us, by sending an email to info [ @ ] simpleuse.eu . Thank you!

Feel the Difference on your Skin 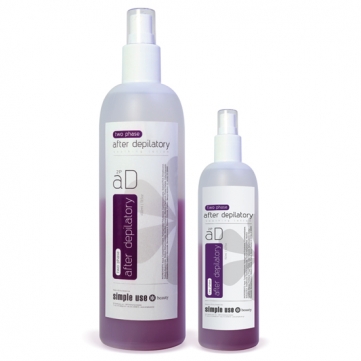 FREE OF MINERAL OILS AND PARABENS

Two-Phase after Depilatory, because of its two-phases (oily and aqueous), can achieve two effects simultaneously.

The oily phase, due to the combination of highly skin-friendly ingredients, camphor and menthol, removes the residues of wax while leaving a pleasant cooling sensation, instead of the greasy feeling which is left by mineral oils. The aqueous phase, being rich in emollients and moisturizing ingredients, such as hyaluronic acid, hydrates the skin and offers a silky texture on it.